Why Sitting In Chairs Is So Bad For You

Human beings were not designed to sit in chairs for extended periods. It is very bad for your spinal health, and, as it turns out, is also associated with increased risk for heart disease, cancer, diabetes, and other serious illnesses.

When I lived in rural Tamil Nadu, in India, back in the late 70's and early 80's I rarely saw chairs. There were two normal sitting positions, especially, but not only, for rural peasant folk.

One, out of the house where there was no mat or something clean to sit on, people would squat, comfortably, for long periods of time, just as they do in South East Asia and Southern China.

It was not unusual to see two little old ladies, sitting on the side of the road waiting for the bus chatting away drinking hot tea in a squatting position, demonstrating amazing range of motion in the spine, hips, knees, and ankles.

Squatting was also the posture of choice when performing certain kitchen tasks, such as working at the Ammi/grinding stone, or cooking at the stoves that are on the floor. Again, the issue there in part is that the flood is not so clean, and the squatting posture is more suitable to the biomechanics of the task.

Indeed, squatting is also the natural posture for defecation. Defecating on a throne like device, the western commode, a biomechanically inefficient posture for elimination. You can make a lovely porcelain toilet designed for squatting, as we had in our ashram in Chennai. Its much easier to eliminate stool when squatting, and gives a much more complete evacuation.

In the house, when getting comfortable for something like reading a book, or grinding the rice and ulandu parapoo (urad dal) for iddli or dosai at the "Aatu Kallu", which is usually in a cleaner place for sitting, the normal posture was sitting cross legged, in what is called Sugasanam, or the easy pose.

Indians in those days also ate at home sitting on a clean floor, with the food laid out on banana leaves or stainless steel plates. For this, too, the normal posture was sitting cross legged. If you have never seen this, I recommend a very beautiful film that portrays Bengali village life very authentically, called Pather Panchali, by the great Indian filmmaker Satyajit Ray.

I also could not help but notice that in my tiny village of Kaanadukathan, the small shop called Pazhani Andi Kadai, where I used to buy spices and flour and such things, while the employee rushed about and did all the hard work, the proprietar, Mr. Pazahni Andi, cooly sat cross legged, in spite of his gigantic Ganesh like pot belly, for hours at a time in front of the till, a large teakwood money box.

This was typical in those days of small shopkeepers throughout India. While for many of us westerners, even Sugasanam, the easy pose, poses challenges, when you have been sitting like that since childhood the range of motion in your hips stays quite good, most likely building a more flexible joint capsule, fascia, and ligaments in the pelvis and sacrum.

In any case, back to the issue of chairs. I have read that the negative quality of chair sitting does not occur when sitting on the floor or squatting, because in the latter two cases, in order to maintain your upright posture you must recruit your muscles, so your body is actually working.

Whereas sitting in chair, nothing is working or moving. This is why chairs are so bad for circulation, first of all. Second of all, when it comes to the spine, especially people with Lumbar Disc bulges or herniations will suffer, because sitting in chairs loads the disc spaces, meaning the effect of gravity is on the discs, rather than on the ischial tuberosity of the pelvis.

For my patients who have desk jobs and back problems, I recommend getting up to go to the bathroom a bare minimum of once every hour, and even better, once thirty minutes. I say bathroom, because in some companies you can't just go for a walk, but who can say anything if you have to go to the toilet!

What I did not know, until reading the below article, is just how bad extended sitting is on so many levels.

Here is the link to the Web MD article on the dangers of extended sitting:

13 Reasons Why Sitting Too Much is Bad for Your Health

Neem, The Medicine Tree of India The Neem Tree,  is a large tropical tree whose majestic original home is in  India and Burma ..... the rest of this article has been moved to my website, here

I am strongly against using this daily for prevention. Its a medical error.   here  is why. thanks! 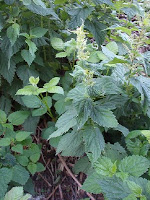 Stinging Nettles in Soup and Medicine

When I was a teenager, I was enthralled by the story of Milarepa, "Tibet's Greatest Yogi," who, after a great career as a murderously vengeful black magician, had a change of heart, and transformed himself, in part by great austerities, and became a great and beneficent human being, one of Tibet's most respected heroes. At one point Milarepa spent 12 years in the cold high mountains, meditating and living only on soup made from Nettles and herbs. This is one of the most exciting moments in his story. And I remember wondering at the time what these Nettles were; I had heard of them before, and knew they grew wild in the forest, but somehow equated them with lichen and moss. They sounded profoundly unappetizing. But no, Nettles (Urtica dioica) are more like wildflowers, shooting up all over the Northern Hemisphere every Spring, and rising to 2 meters by mid-Summer. Spring comes early to the southwest coast of California, today is Feb 11 and the wild Nettles growing